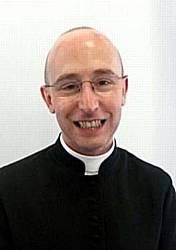 I have been asked to write a something for the November issue of the magazine and thought it would be a good idea to take this opportunity to tell you a little bit about myself.

My name is Alan Simpson and on the 28th June this year I was ordained deacon by the Bishop of Manchester at the Cathedral, and subsequently licenced on the 5th July as the Self Supporting Assistant Curate to St Nicholas’s.

I am a Mancunian born and bred having been brought up in Miles Platting. I was baptised a Roman Catholic and attended Catholic Schools, so the practice of my faith has always been a very important aspect of my life from an early age. Following studies for a degree in politics, I was accepted by the Roman Catholic Bishop of Salford to study for priesthood within the Catholic Church. I commenced theological and formational studies in Spain, Durham and Rome before discerning that ordination into the Roman church was not where I thought God was calling me to be,
so I took the painful decision to leave formational training.

However, I can certainly relate to the old adage of ‘if you want to make God laugh, tell him your plans’! Having embarked on a career in Administration Management within the Higher Education sector, I found myself more and more drawn to the Church of England and the realisation that the sense of vocational calling to ministry I felt so keenly since childhood, had not gone away. I began to attend an Anglican church in Oldham where I was warmly welcomed by both the incumbent and the congregation alike. As I became more involved in the worshiping life of the parish, I began
to feel the pull to ordained ministry more and more. I was formally received into the Church of England in January 2009 and began the discernment and selection process for ordained ministry within the diocese. I attended a Bishop’s Advisory Panel in October 2012 and was selected for training.

I began my theological studies in September 2013 with the Yorkshire Ministry Course (based at the College of the Resurrection, Mirfield) and I will graduate with a Post Graduate Diploma in Theological and Biblical Studies from the University of Sheffield in January 2016.

I am currently self-supporting, that is I am also in full time employment, currently working for the Diocese of Manchester as the Committee Secretary to the Diocesan Mission and Pastoral Committee & Diocesan Advisory Committee for the Care of Churches. I currently live in Dukinfield with my partner, Stuart and our dog, Rufus.

I was truly delighted when Bishop David asked me to explore the possibility of serving a curacy at St Nick’s, and I was even more delighted when Rachel and the PCC offered me the opportunity to serve my title with you. I have felt immensely blessed these past few months at the overwhelming welcome I have received and I am very much looking forward to the months and years ahead of journeying alongside you and serving you all as your curate.