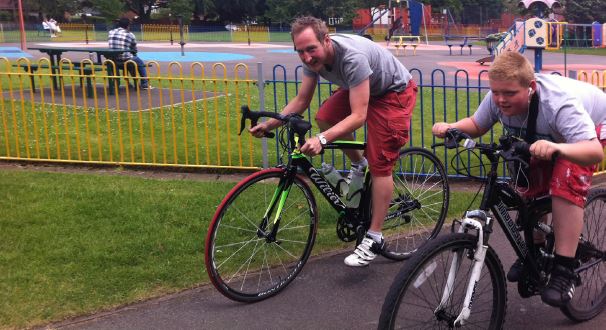 On Sunday 5th July, I had the privilege of joining Adam, a member of St Nick’s Maker’s Club, on his sponsored cycle ride to raise money for my nephew Liam. For those who may not have heard, Liam was diagnosed with a rare and aggressive form of cancer in May and has been undergoing chemotherapy to try to eradicate the secondary tumours in his bones and in preparation for surgery to remove the primary cancer on the adrenal gland above his kidney. As Liam’s family live in America they will be faced with a substantial bill for the 18 months of treatment that is currently planned. Hearing this news in the church notices several weeks ago, Adam took it upon himself to organise and complete a 90-minute sponsored cycle ride in a local park to raise money for Liam’s family.

I was so impressed by this show of compassion and commitment by someone of primary-school-age that I thought the least I could do was tag along as Adam’s ‘domestique’: a French term used in cycle racing to describe a rider who works for the benefit of his team leader. One of the roles of a domestique is to sacrifice his bike to the leader should they develop a mechanical problem at a crucial point in the race and I feared this would be the case when Adam turned up on a bike with neither front nor rear working brakes! He explained that he had wanted to get them fixed before the event but the bike shop couldn’t do the repairs in time. Instead he had developed his own stopping technique that required him to push his footwear down on his front wheel while still in motion and having witnessed this for myself I had to admit that he had quite the knack (and worn trainers) for it. Nevertheless, we thought it wise to enlist the help of our new Curate, Alan (officially inducted into post only that day), to bless the bike, giving Alan a crucial, though just too late, insight of what kind of church he had gotten himself involved with. 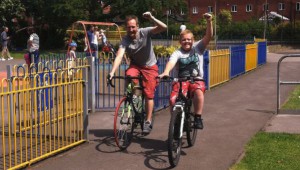 I’m happy to report that the blessing had the desired effect and the actual ride was much less eventful than the prologue. In glorious summer sunshine Adam completed the 90-minute cycle, covering a total distance of 11.46 miles and, most incredibly of all, having zero crashes.

So far Adam has raised £377, which is an extraordinary amount, but even more extraordinary is the way Liam’s illness is touching lives around the world and people like Adam are responding with selfless love and solidarity. As Jesus said, “for the kingdom of God belongs to such as these” (Mark 10:14).