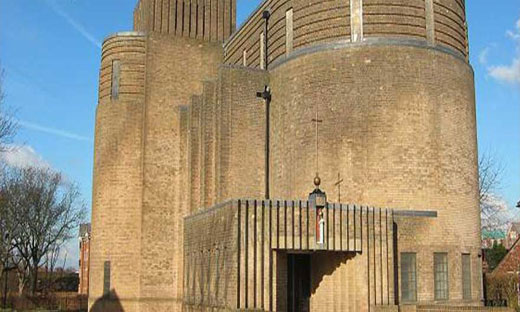 It is the first church designed by the architect Nugent Francis Cachemaille Day.

In 1931 The foundation stone was laid. The ‘old’ hall was built and used for services.

From 1963/64 an extension was added to create choir stalls to the rear of the building.

In the late 1990’s the rectory and two halls were demolished and the land sold in preparation for the restoration project.

At a cost of over £1million a complete restoration was carried out in 2000/02 under the guidance of the architect Anthony Grimshaw.

The interior was redesigned with the rear (West End) of the church , including the choir stalls , being converted into a hall for community use. The new hall and worship area are separated by a moveable screen and a striking glass circular meeting room has been constructed at first floor level. The exterior remains as in 1932.

As a part of the restoration a new rectory was built on the corner of Kingsway and Poplar Road.

The new building was dedicated by the Bishop of Manchester in June 2002.

Find out more about the history of St Nicholas Church