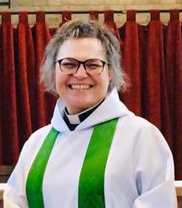 I wonder, do you have a favourite season of the year? Mine is autumn. Despite the fact that autumn signals the decline of the year into winter’s cold, grey mornings and half-light, there is something truly magical about what Keats called the ‘season of mellow fruitfulness’. Perhaps it is the riot of fiery colours that can adorn autumnal trees that I find most appealing; perhaps I am beguiled by childhood memories of walking to school through piles of fallen leaves; perhaps I am excited by the sense that autumn promises the seasons of Advent and Christmas to come.

I suspect that my reasons for loving autumn sound very romantic and sentimental, especially from an urban point of view. I love Manchester, but it can feel very far away from the visions conjured up by my romantic ideas of autumn. In this era of climate crisis and change, it can increasingly feel like the seasons are losing their shape and meaning.

When we can have a February day that is as hot as an August one (as we did earlier this year), can we dare to hold on to rustic visions of crisp autumn days?

I’m not sure it’s time to give up on romantic visions just yet, if by romantic visions we mean ideas and practices that can inspire, dazzle and challenge us. While I’ve very little time and energy for comforting visions of how everything in the past was ‘better’ or ‘happier’, I still think that Christians mustn’t lose sight of the wonder held within the changing scenes of life.

When we, as people of faith, are attentive to the state of the world, it can feel depressing. For it’s fair to say that our world is being put under immense pressure by the way our species behaves. One doesn’t need to watch a David Attenborough programme to realise that our world is wounded by our addictions to fossil fuels and conspicuous consumption.

However, if our human capacity for what Christians traditionally call ‘Sin’ means that we readily hurt the planet and each other, creation remains awe-inspiring. Back in August I had the privilege of going on holiday to the west coast of Ireland. It was truly wild and stunning. The weather and light could change several times a day. It reminded me that our wounded world still holds within it immense hope and promise.

Which brings me back to autumn. Even in our great post-industrial city we can still encounter the beauties and wildness of nature. If you are able, find some time in coming weeks to go to a local park and watch the falling leaves or feel the wild wind blow. If you can’t get out, see if you can watch the world go by from your window. There is always something going on.

In short, the Living God is active in this weary earth we walk upon and that should encourage us. However, it should also make us pause. All of our seasons hold within them beauties and pleasures. As we prepare to tumble towards Christmas, let’s not rush on too quickly, but be alert to how God is alive in all things and all we do for love and goodness.

Stations Of The Cross

A liturgy for use at home

<click here> to download a copy of ‘Stations of the Cross : a liturgy for use at home’

We use cookies to ensure that we give you the best experience on our website. If you continue to use this site we will assume that you are happy with it.Ok